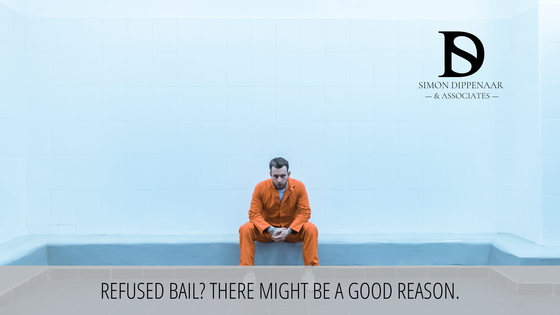 Some of the grounds on which bail can be refused

Arrest is a scary business. Even when someone does something they know to be illegal, they don’t expect to be arrested. Every criminal hopes to get away with the crime. If the arrest may be unlawful, it is even more frightening. But the one consolation for anyone in this situation is the hope of bail. Bail refers to “the temporary release of an accused person awaiting trial, sometimes on condition that a sum of money is lodged to guarantee their appearance in court”. There may also be conditions imposed, for example the police may retain the passport of someone believed to be a flight risk, or the accused may be confined to their residence. But bail is not a universal right. Certain crimes and certain circumstances may cause a judge to deny a bail application. Let’s look at some of the grounds on which an accused may be refused bail.

The Criminal Procedure Act provides for the denial of bail and the detention of the accused in custody if the interests of justice are better served by detaining the person. There are various grounds for this. We’ll look at each in turn, and explain it.

Bail can be refused if the court is satisfied that an accused may be likely to commit the crime they are charged with and might continue to perpetrate such crimes if released on bail.

The court will consider the accused’s family and occupational ties, assets and income and the severity of the crime, among other factors.

This concern is quite complex, and the courts will consider all of the following:

The court will look at:

This is not common but might apply in the case of a crime that is particularly heinous or socially abominable, such as the murder of a child. The court will consider:

Our justice system is founded on the premise of presumed innocence, which is why we have a protocol for not depriving an accused of their freedom until found guilty (i.e. bail). Therefore, in deciding to grant or refuse bail, the court is cognisant of the impact of its decision on both the accused and society. The court must weigh the interests of justice against the right of an accused to personal freedom and the prejudice the accused will suffer if bail is refused.

The court must also take the following into account:

Furthermore, the court must apply a proportionality test — the likely harm must be weighed against the deprivation of liberty of the accused.

Cape Town law firm SD Law is an expert in criminal defence, including DUI and possession of drugs. We are experienced in the bail application process, with a reputation for handling after-hours bail. Speak to us to find out more or about any other aspect of criminal law. Call Simon on 086 099 5146 or email sdippenaar@sdlaw.co.za.