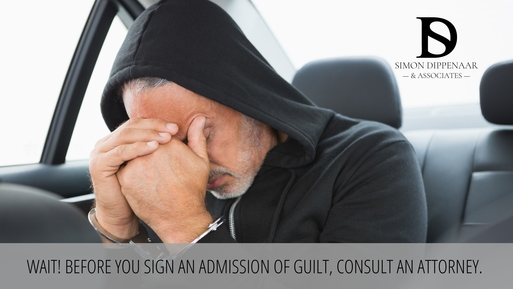 Should you sign an admission of guilt if you are accused of a crime?

If you have been arrested for a minor offence – such as shoplifting – and you have been detained in custody, the arresting officer may give you the chance to sign an admission of guilt and pay a fine. You may also have the option of paying an admission of guilt fine on receipt of a summons. This takes the place of a court appearance. It is not the same as bail, which is a sum of money you pay to be released from custody until you stand trial. The admission of guilt is exactly what it sounds like: you admit you are guilty of the charge. You pay a fine, and they let you go home. There is no trial in court.

But you don’t have to sign it. This is an important point.

When can you be offered the option of admission of guilt?

A peace officer, usually a police officer, will issue you with a written notice explaining this option if the criminal offence is considered minor and if the officer believes you would not be fined more than R5 000, if your case were to go to court. An example of this might be contravention of curfew under the Alert Level 3 conditions of the lockdown regulations.

The timing of this option is usually before you appear in court, often when you have been detained in custody. But it can also be an alternative presented to you in court, before you plead guilty or not guilty to the charges laid against you. The former keeps the case out of court and decongests the court system. The latter speeds up the court procedure, which basically has the same result.

What are the consequences of admitting guilt?

Think carefully before signing an admission of guilt

Being arrested is frightening, particularly if it is your first time and it is for something minor or accidental, such as breach of curfew. It may be very tempting to sign the admission of guilt to get out of custody and go home. No one wants to spend the night in jail. But it is not something you can easily retract, if you change your mind later. And the repercussions of a criminal record will affect your career prospects for a long time to come.

In almost every situation, it is strongly advisable to speak to an attorney before you sign an admission of guilt and pay the fine. Even if you did commit the offence, there may be mitigating factors you are unaware of. For example, if you are found outside your home after 21.00 because your car broke down and you were unable to call for a lift, a judge may decide in your favour and not convict you. An admission of guilt can be set aside by a court at a later date, but it is not a common occurrence and will cause you a lot of trauma in the interim. Call SD Law before you sign anything.

SD Law is a firm of attorneys in Cape Town with expertise in criminal defence, including DUI and  possession of drugs. We are experienced in the bail application process, with a reputation for handling after-hours bail, and we will assist you with an admission of guilt decision. In these uncertain times citizens have been arrested for buying infant formula for a newborn baby after curfew. Don’t take chances. Save our urgent assistance number in your phone: 076 116 0623. If you have queries about any aspect of criminal law, call Simon on 086 099 5146 or email sdippenaar@sdlaw.co.za.